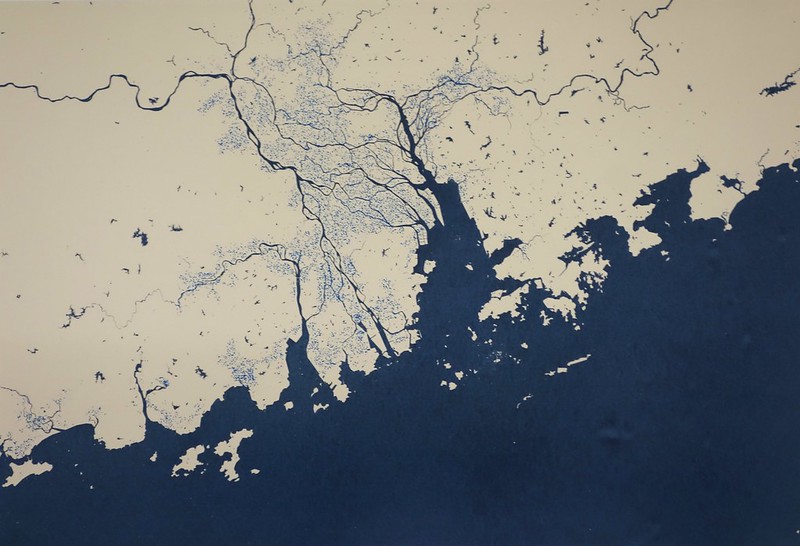 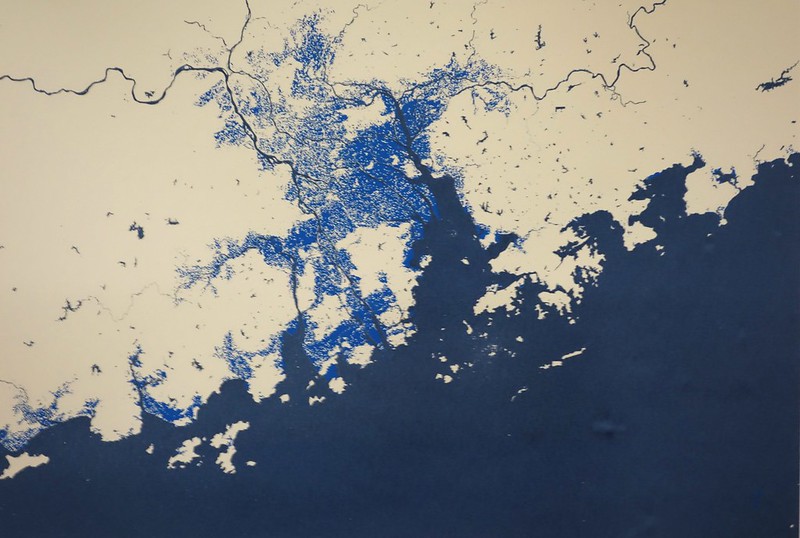 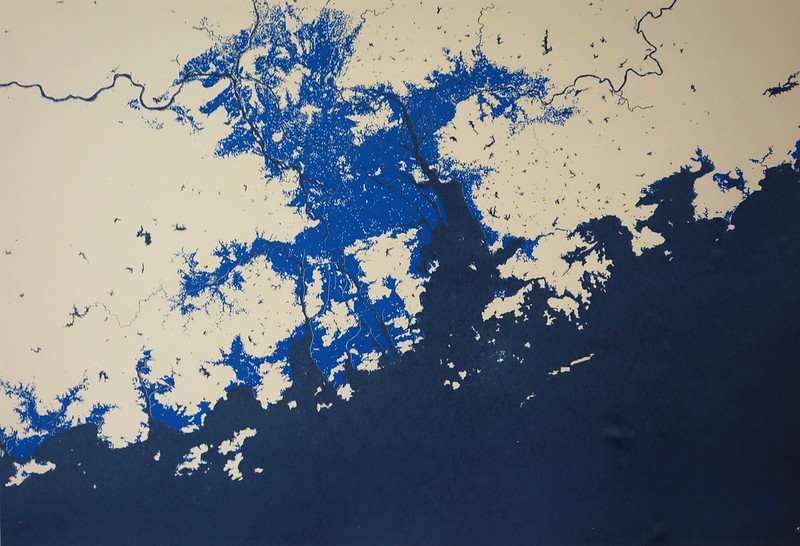 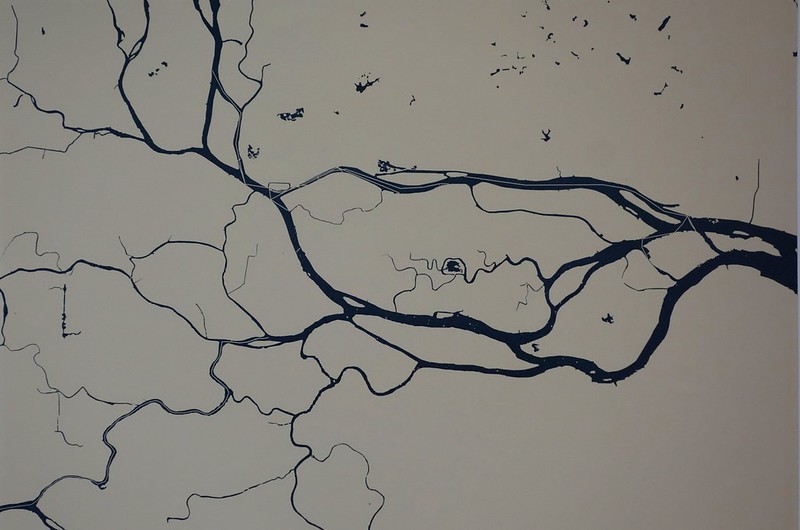 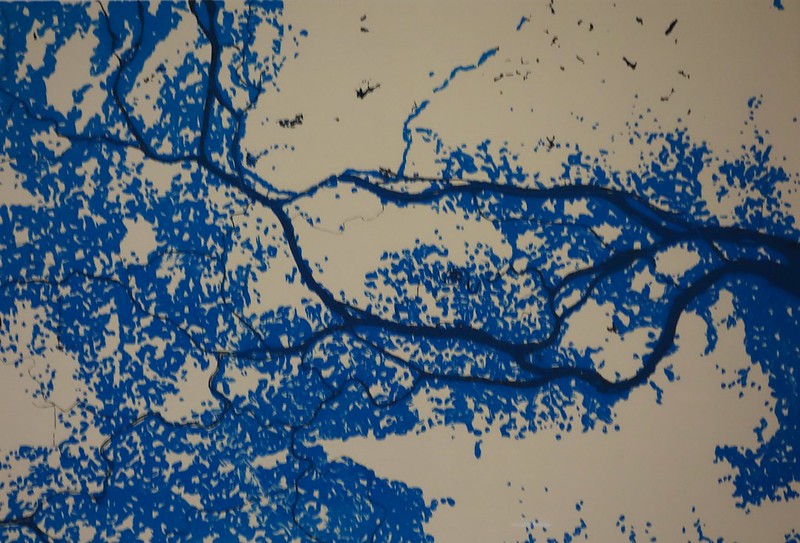 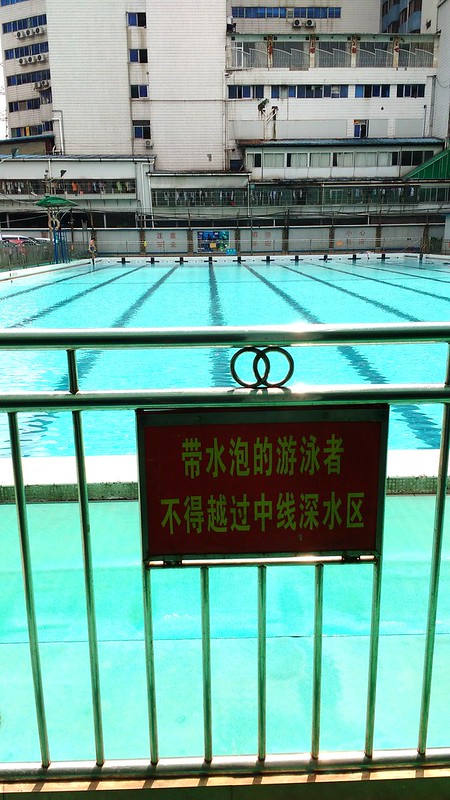 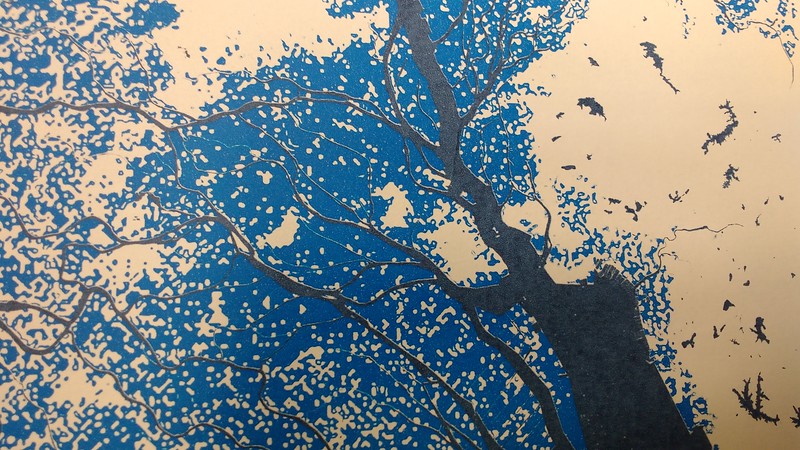 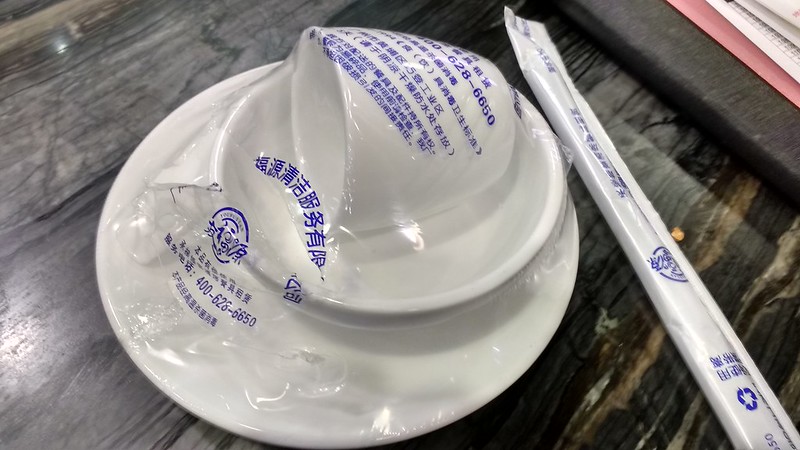 It’s going to rain.
My mum is waiting for me to have supper.
But what can I do?
I’m in a watch house.
My mum said “come home and eat”
It’s all my fault
I am cocky.
You are cocky.

I’ve returned to Guangzhou for the second time. This time working towards an exhibition called Sea Pearl White Cloud at Observation Society, alongside Trevor Yeung.

Between trips to Guangzhou, I’ve been working with John Causley, a graphic designer from Big Fag Press. We’ve been using map-making as a way of trying to understand the problem (or is it?) of sea level rise, and its future impact on the Pearl River Delta.

Rummaging around, we found this great little website, which crunches topographic data and allows you to visualise rising sea level rises as an overlay on top of google maps. You can toggle the amount of rise in metres. For example, here’s Guangzhou with a one metre rise: 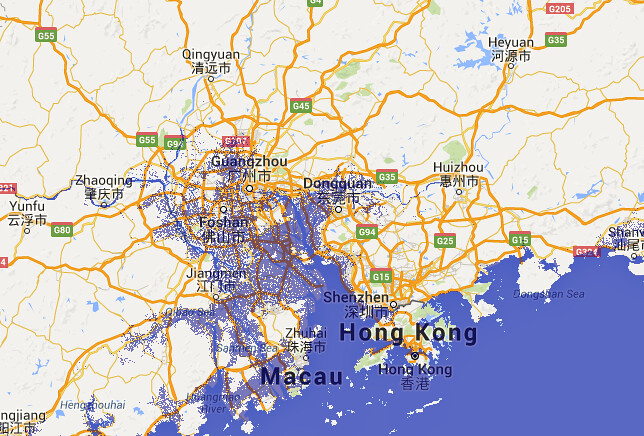 John set to work trying to extract the base map from the flood overlay, so that we might have something to play with for making a print. Some of what he was able to do was elegant (switching off various bits of data in google maps in order to capture the mapping info) and some involved more brute force (doing a screenshot of the flood map layer and then photoshopping out irrelevant info).

Here’s where we got to: 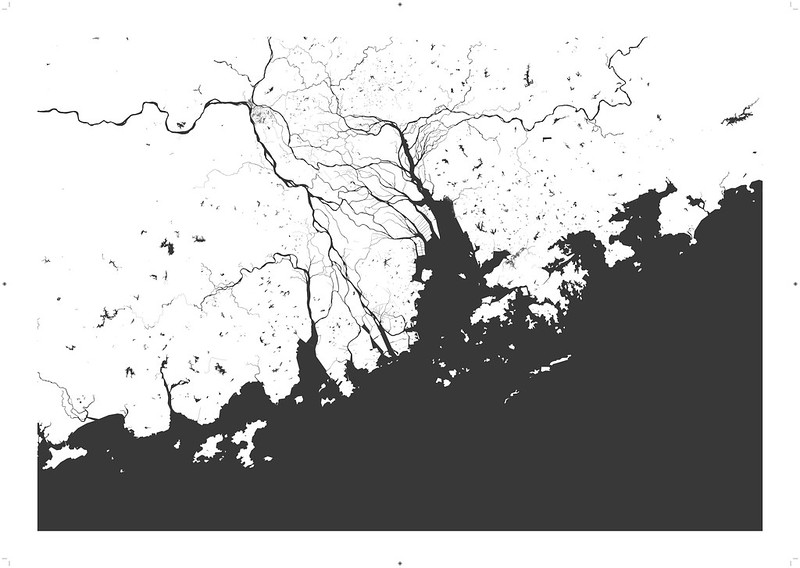 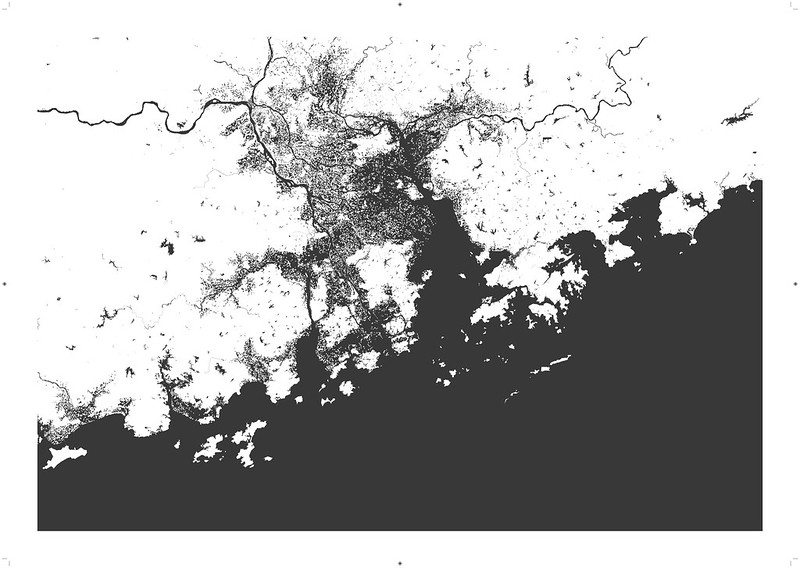 When we printed these maps out as good quality inkjet drafts back in Australia, we were struck by a few issues:

The map certainly has a dramatic effect. One metre of sea level rise seems to obliterate much of the city. I was thinking that it might be interesting to have these maps printed to use as a point of discussion with Guangzhou folks.

However, it would be good to be able to zoom in closer. Someone living in Haizhu district, for example, might want to know what is going to happen in their local neighbourhood. When we tried the zoom, focusing on Haizhu, this is what emerged: 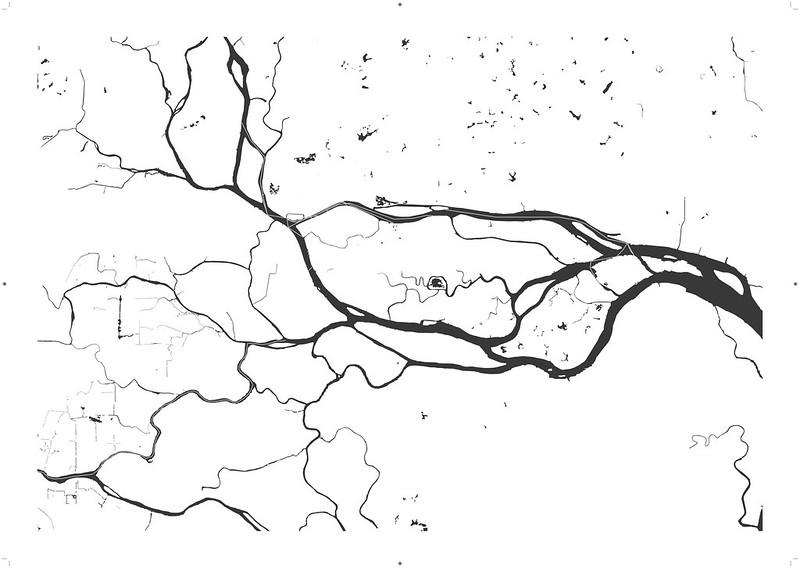 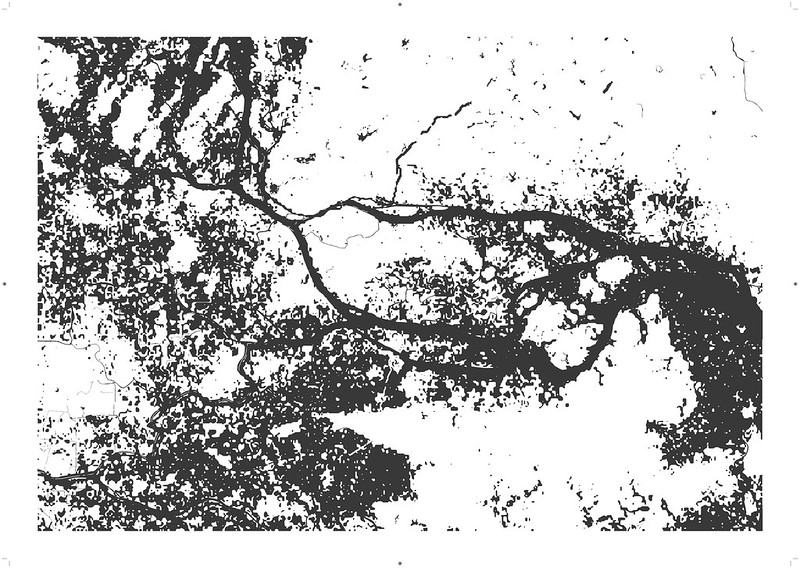 This looks good – but we are acutely aware that this data is not really “zoomable” to this extent. At this level of enlargement, photoshop begins to invent information. Is this a problem?

I talked to Clive Schofield, a friend from University of Wollongong who is a “bit of an expert” on geography and politics. What I really wanted to know was, how long will it take for the 1metre sea level rise scenario to play out? When could Guangzhou expect to see this happen?

Clive warned me that the sea level rise maps we’ve been making are based on a the simplistic “bathtub modelling” system, which doesn’t take into account a whole range of factors. In a follow-up email, Clive writes:

I am afraid that what you are asking for doesn’t really exist per se…It is a fiendishly difficult and complex business to try to disentangle causes of sea level rise and particularly to distinguish what proportion of sea level rise is attributable to a particular factor.

Not only do bathtub modelling approaches generally not take into account regional variations in sea level but they also don’t accommodate how particular coast and coastal ecosystems interact with sea level. Such approaches generally treat coasts as static landforms, therefore imagining that as sea level rises it simply ‘marches up the contours’. While that might arguably be true for rocky coastlines it is a flawed approach for other coastlines including the low-lying generally soft sediment ones you are considering. It is important to realise that not only is sea level rise likely to be highly uneven spatially, but that its impacts on diverse coastal environments will be similarly varied.

Clive suggested that one of the factors affecting the Pearl River Delta might be that if there is damming of the water further upstream, then the delivery of sediments to the delta which traditionally built up the land won’t be happening. In this case, independent of any sea-level rise, the delta lands may be in fact subsiding. This paper seems to support that idea.

It’s all a bit overwhelming. Even though I’ve learned a fair bit in the last few weeks about all this stuff, not-knowing seems to be the main thing here. It makes me feel … how? Dissatisfied? A bit sick in the stomach, to be honest.

Postscript – I sent this post to The Abovementioned Clive. In his reply, he suggested that I could try to be a bit more upbeat about all of this. He writes:

The lesson from certain coastal ecosystems is that they are able to autonomously adapt to changing sea levels… if we allow them to. That is where management of coastal land and sea scapes becomes crucial.

This haiku-ish text is from a very short song by Wu Tiao Ren, a Guangzhou band. With any luck, today I’ll get to meet the band and talk about a possible collaboration.

An apartment block’s
Inverted reflection is
Slowly obscured
By a floating carpet remnant. 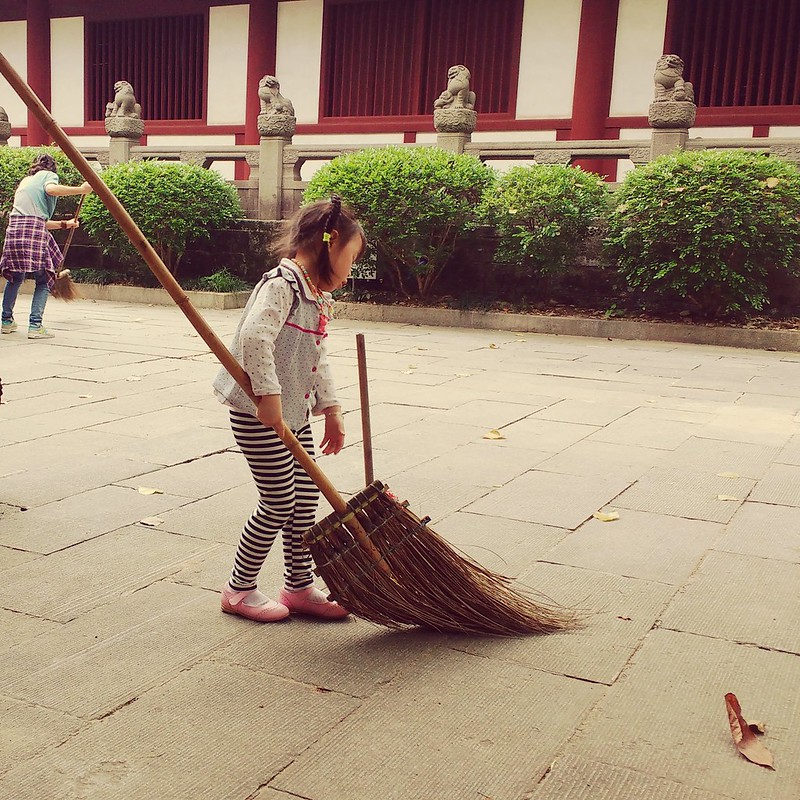 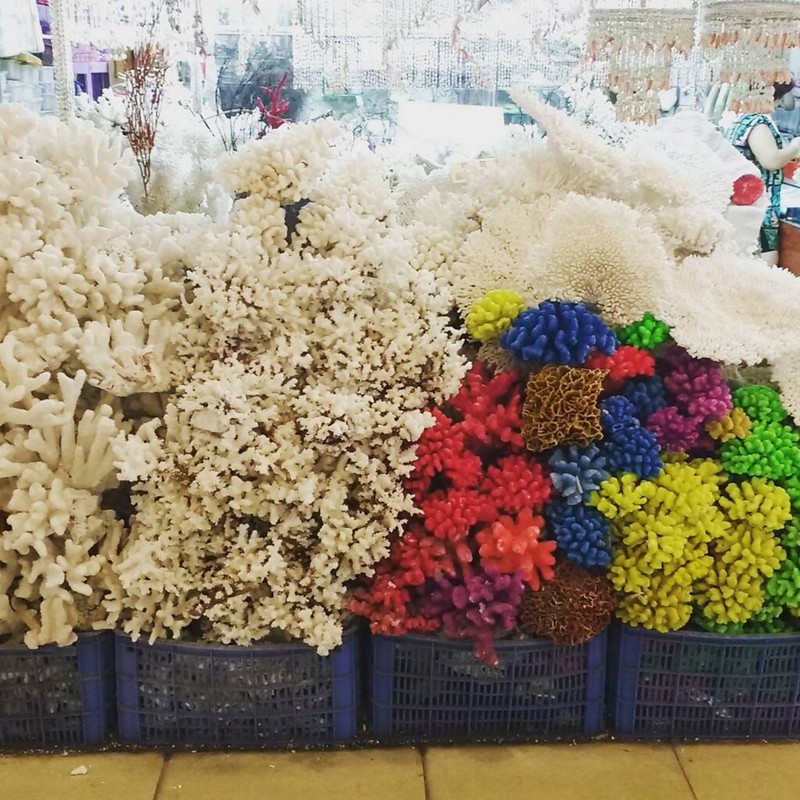