In San Diego, I went with Alex to visit the Centro Cultural de la Raza. There was an exhibition themed around the bending and remix of pop culture imagery for Chicano politix.

At the back of the gallery, both Alex and I were attracted to this silkscreen work by artist Perry Vasquez. The poster responds to the ever-present problem of border crossing in San Diego / Tijuana, where the two sister cities are divided by a massive fence which goes right out to sea: 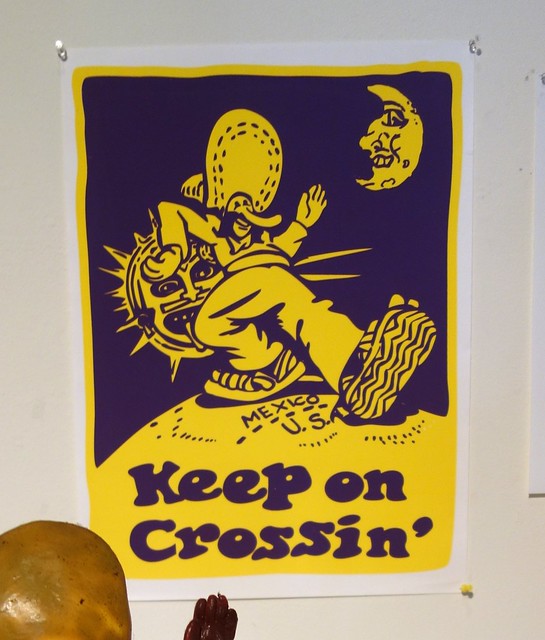 It was unmistakably adapted from R.Crumb’s famous Keep on Truckin’ image:

I did a bit of looking around to see the original context for Crumb’s graphic. Created in 1968, it has been stolen and reused many many times. One account has it that this became an “iconic image of optimism during the hippie era.” To which, the ever restless Crumb responds:

I became acutely self-conscious about what I was doing. Was I now a “spokesman” for the hippies or what? I had no idea how to handle my new position in society! … Take Keep on Truckin’… for example. Keep on Truckin’… is the curse of my life. This stupid little cartoon caught on hugely. There was a D.J. on the radio in the seventies who would yell out every ten minutes: “And don’t forget to KEEP ON TR-R-RUCKIN’!” Boy, was that obnoxious! Big feet equals collective optimism. You’re a walkin’ boy! You’re movin’ on down the line! It’s proletarian. It’s populist. I was thrown off track! I didn’t want to turn into a greeting card artist for the counter-culture! I didn’t want to do ‘shtick’—the thing Lenny Bruce warned against. That’s when I started to let out all of my perverse sex fantasies. It was the only way out of being “America’s Best Loved Hippy Cartoonist.”