The Gold Coast, where Allan Yeomans works, is particularly vulnerable to sea level rise. See this map for a scenario based on a conservative rise of 110cm.

I’ve come from Wollongong to visit Allan Yeomans, the inventor of the Yeomans Carbon Still.

It seems fitting that Allan’s workshop is located here at the Gold Coast, where hundreds of skyscrapers cluster along the beach, perched barely above sea level. What will happen to this place in the near future, when sea levels rise up and flood the streets, and cyclones erode the foundations of the buildings? Will it become an unlivable ghost town?

Across the world, low-lying cities like the Gold Coast are ever more vulnerable to the effects of climate change, and Allan Yeomans hopes that his invention can help tackle this global problem. 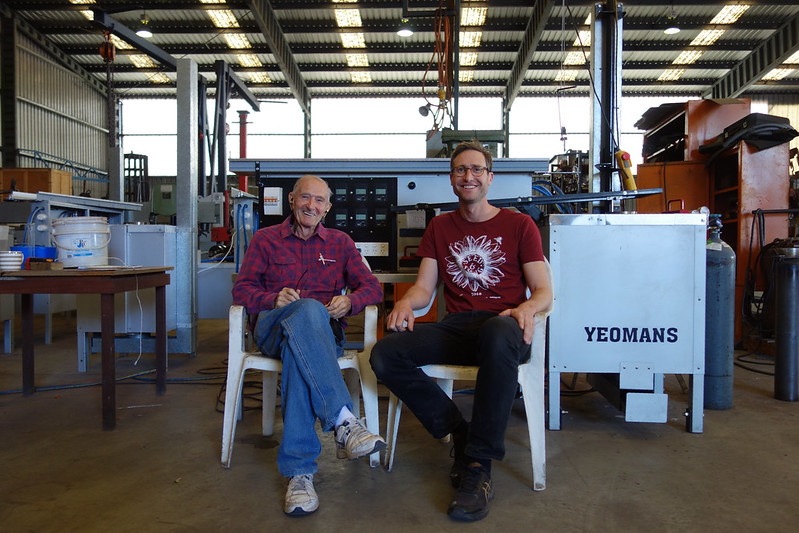 Allan is the son of the late great PA Yeomans, inventor of the Keyline Design system for ecological agriculture in Australia, so he has an impeccable farming pedigree.

Having worked with his father on the development of Keyline in the 1950s, Allan went on to create the Yeomans Plow Company, which to this day supplies the world with Keyline Ripper Plows – a farming implement designed to gently open the ground to air and water without churning it up and damaging the structure of the sub-soil ecosystem. Using a Keyline Plow helps farmers to build topsoil, increase fertility in their paddocks, and reduce their need for chemical inputs.

And now, over the last five years, Allan has been creating and refining a new tool for farmers. While burning coal and fossil fuels releases greenhouse gases and accelerates global warming, farmers using regenerative agriculture principles work with plants to draw carbon dioxide back into the soil. If, as many believe, carbon emissions should be taxed as atmospheric pollution, then surely farmers should be able to be paid for removing those pollutants from the atmosphere.

But how can farmers be paid? Five years ago, Allan realized that a simple, affordable and reliable way of measuring the levels of carbon captured by farmers was missing – and so he set out to create one for himself, and the Yeomans Carbon Still was born. 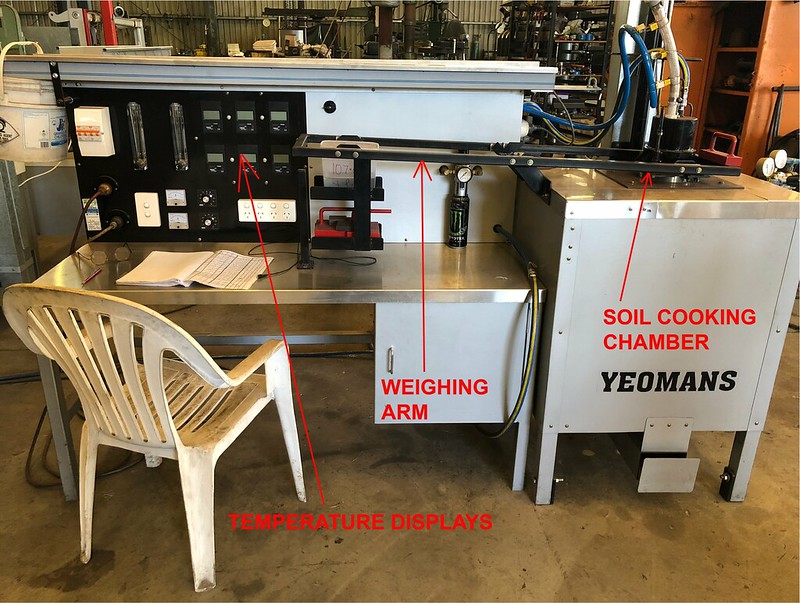 The device effectively “bakes dirt” – heating it to between 500-550 degrees celcius. This is the temperature at which any organic matter in the soil burns away. By weighing the soil before and after this process, Allan can determine how much carbon has been lost – and therefore how much the sample contained before processing. If a baseline measure is taken this year, and the process is repeated in subsequent years, then it’s possible to work out how much new carbon the farmer has pulled from the air into the soil. At this point, you could calculate how many dollars per tonne of carbon the farmer should be paid for providing beneficial services to the global ecosystem.

Right now, with Australian politicians bickering over electricity prices and energy supply schemes, a system like this for compensating farmers who reduce the amount of carbon dioxide in the atmosphere still seems like a long time away. But following the Paris Climate Accord of 2015, the world is waking up to the urgency of the problem and the need for solutions.

Once a legal and political framework has been worked out, Allan envisages a financial incentive scheme for carbon reduction that will transform the way farming is done on a colossal scale. If all the farmland in the world increased its soil carbon content by just 1-2 percent, he argues, this would be enough to pull back all the excess carbon dioxide that has been released since the industrial revolution. The depletion of the world’s agricultural soils from chemical farming throughout the 20th century means there is enormous scope for this remediation work. 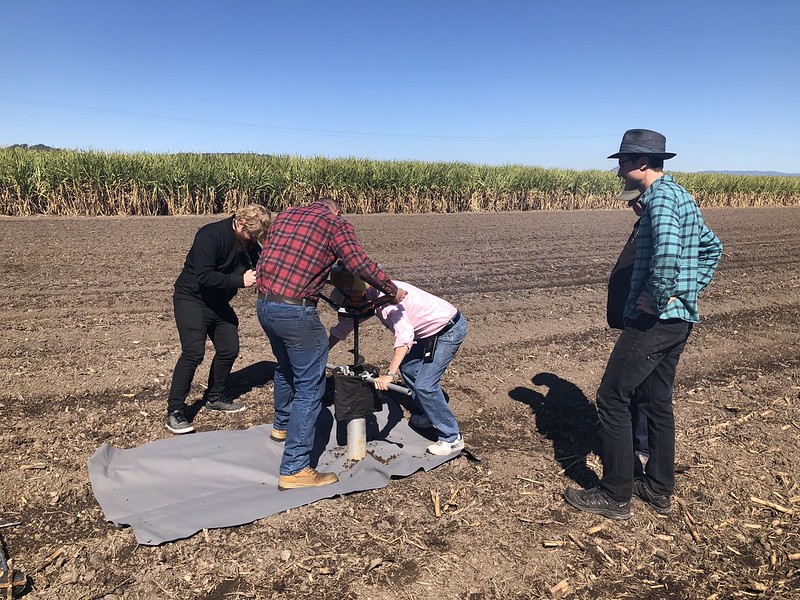 Allan Yeomans and his assistant Darren collecting a soil sample from Robert Quirk’s sugarcane farm in the Tweed region of Northern NSW. Robert was the winner of 2014 Carbon Farmer of the Year.

The difference between the Yeomans Carbon Still, and existing systems for measuring soil carbon lies in its simplicity and affordability. Compared with expensive lab equipment, the Still costs only ten thousand dollars, and will therefore repay its investment after several soil tests. It also works with much larger soil samples – up to 2kg in size – than the tiny amounts used in standard soil carbon testing devices. This reduces the possibility of skewed results when small samples are taken as a representation of a vast paddock. 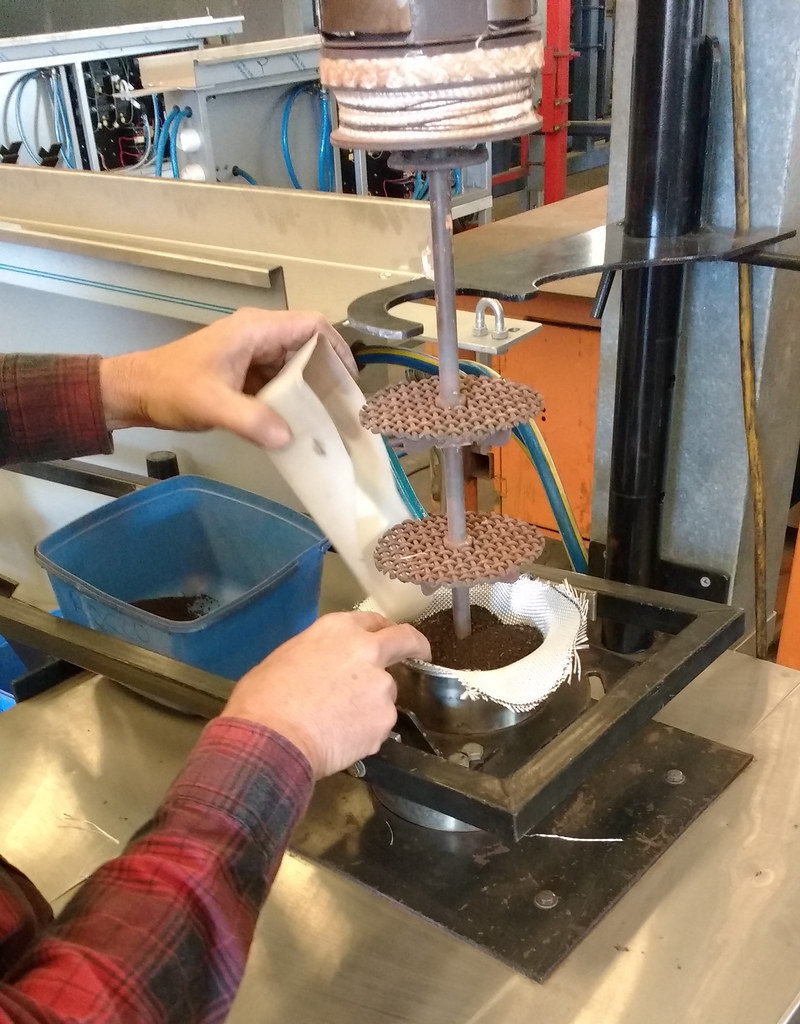 At 86 years old, Allan continues to refine his invention, and to lobby government and soil scientists to adopt the Yeomans Carbon Still system as a valid methodology for soil carbon testing. In 2019, I will be exhibiting the machine at the Monash University Museum of Art, in an exhibition curated by Hannah Mathews called Shapes of Knowledge. My plan is to demonstrate the use of the Still, and stimulate discussion around the question of soil’s relationship to climate change.

There are still many problems to be worked out, not least of which is how to legislate to fairly reward farmers for their efforts, but the time is ripe to seriously begin this discussion.

Baking Dirt: Soil and the Carbon Economy is a key project of “An artist, a farmer & a scientist walk into a bar…” produced by Kandos School of Cultural Adaptation. Find out more here.